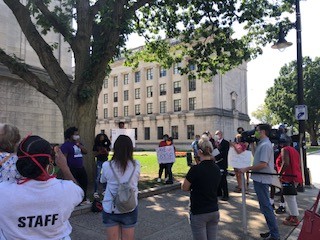 Friday afternoon September 4th was a day that will live long in the history of school-based youth service programs. It’s a day where the students of the program took a voice to speak about the value of the program, services, and resources School Based Services offers to over 90 sites across the state of New Jersey. As an employee of Mercer Council and having been a part of the school-based youth service program as a program director and advocate for nearly 15 years, it was a day filled with an array of emotions and one that I will never forget. After arriving at the site of the capital State building at 2:30 and being met by two outstanding and articulate young people from Trenton’s School BaseProgram, (the organizers), I was excited about how the rest of the event would proceed. These young people were so determined and motivated to save the program that they independently organized this rally so that their voices could be heard. It was even more of a surprise to be met with one of our own Ewing High School Students who had joined independently of our call, but through his personal contact with the students from Trenton. The youth handled their own networking through social media. Once people began to gather, we began to rhythmically chant exciting expressions for support of school-based program, interjected by an array of volunteer speakers. One speaker, who quietly approached me from the back was a now 30-year-old young man who I had gotten to know the very first year I became a director. When he spoke to the crowd, he mentioned how impactful the program was to him and how much he appreciated all that we poured into him. My eyes were filled with tears as I watched him and our current students speak so passionately about how the school-based youth service program is so needed in the lives of our young people today. It was also amazing to see the support we received from the Mercer Council Staff. Both the executive and assistant executive director were present in solidarity along other staff. One such person, Melissa Arnold, spoke passionately about how as a mother, mental health advocate and community activist the program has been a beacon of hope to so many students she comes in contact with. Many of the programs represented were able to stand united with one another and we all felt empowered by the unity demonstrated on that day. Each program had their respective T- shirts yet we all spoke universally about how the program has shaped our lives. On Wednesday September 9th a virtual rally was held with over 600 people on. We saw bipartisan representation from senators, assemblypersons, lobbyist, school administrators, superintendents, parents, alumni and students sharing united declarations about the program and how we must do everything we can to keep the program from defunding. We’ve spent the last two weeks organizing, strategizing and pleading through emails, call, letters and gatherings. We received a glimmer of hope when we heard through his weekly talk radio program, Governor Murphy mentioned that he has been meeting to find ways fund the continuation of the program. We are optimistic that our efforts will pay off. As the committee persons meet this week to vote on the governor’s final plan, we are encouraged that Governor Murphy expressed an interest in finding a way. He is reported as saying “This is one of the things that we’d like to try to find a way to get back in the budget…This is one that I think there’s a broad agreement and support to try to find a way to get back in. I’ve just got to make sure we have the money to pay for it”. Let us continue to keep him accountable to his word. You can still leave a message at the governor’s office by calling 1-609-292-6000.